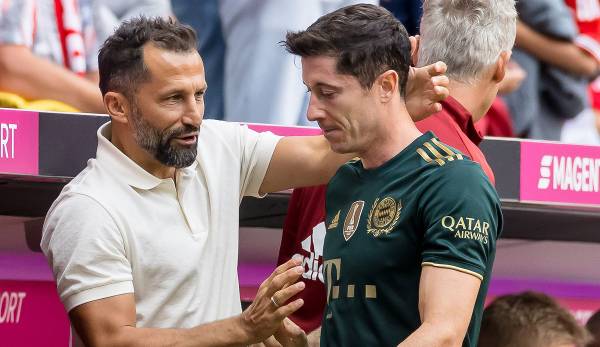 Robert Lewandowski’s announcement that he does not want to extend his contract at Bayern puts Hasan Salihamidzic under pressure. His reaction to the situation could even be decisive for his own future with the record champions.

Robert Lewandowski will not extend his contract, which runs until 2023. Hopefully the Bayern bosses aren’t surprised. Because it has been clear throughout the season that this scenario could occur.

If sports director Hasan Salihamidzic or CEO Oliver Kahn were asked about it, the answers were always the same. Lewandowski still has a contract. You will sit down together in peace in good time.

But Lewandowski is no longer interested in that. One has to hope for the Bavarians that the always soothing statements were only smokescreens for the public and that in the background the planning for the storm of the future was already being pushed at full speed.

Because it’s actually a situation that is now part of everyday life for those responsible for sport: A player’s contract expires at the end of the coming season. If you don’t want to go empty handed, you have to sell. The Bayern bosses recently experienced this worst-case scenario painfully with David Alaba and Niklas Süle, who were able to leave on a free transfer.

FC Bayern: Are those responsible prepared?

Actually, those responsible and especially Salihamidzic should have been prepared for the announcement by the Lewandowski side long ago.

Apparently they were working seriously on a commitment from Erling Haaland until last weekend’s cancellation. That would have been spectacular! And would have put Bayern in a comfortable situation. Haaland would have been the striker of the future. Lewandowski’s dream club Barca could then have been signaled: “We now have two of the best strikers in the world in the squad. If you want Lewandowski, pay a reasonable price!”

But now the Lewandowski side has taken action and can put Bayern under pressure. Because Bayern know very well that they cannot afford a sulking Lewandowski without a real sporting alternative in the center of the attack for the coming season. And Lewandowski will sulk!

The already clammy FC Barcelona could use this situation to push the price down. Salihamidzic cannot wait for the outcome of the negotiations on a Lewandowski transfer with Barca and then start looking for a successor. Because Barca would have all the time in the world to haggle over the price.

FC Bayern: A new top striker must be found quickly

The only way out for Salihamidzic: He actually has to sign a real top striker quickly in order to be in a better position when negotiating the Lewandowski fee. To demonstrate: “We now have a top striker for the next few years. If necessary, we can also endure a sulking Lewandowski for a season.” That would be Bayern-like.

However, if you had put everything on the Haaland card and then extended “in peace” with Lewandowski as Plan B if it failed, that would be negligent. One could easily have predicted that world footballer Lewandowski would not publicly allow himself to be demoted to the B solution.

The question of who will become FC Bayern’s new centre-forward after record goalscorer Lewandowski is probably the most important personnel decision at Bayern Munich in recent years. Hasan Salihamidzic’s work was often criticized. His solution in the Lewandowski case will show what he can do.

Incidentally, the sports director’s own contract only runs until June 2023. The Bayern supervisory board will probably only think about a possible extension after this transfer period. How Salihamidzic regulates the Lewandowski transfer cause may even be decisive for his own future at Bayern.